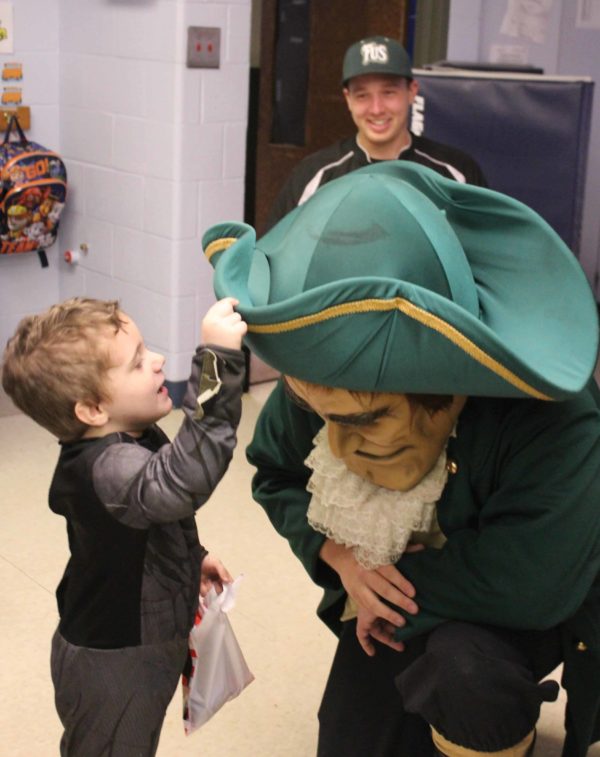 STEUBENVILLE-Members of the Franciscan University of Steubenville Barons baseball and softball teams paid a visit to the School of Bright Promise on Thursday for the inaugural Fall Out with the Barons Day program.

More than 30 athletes spent the day interacting with an estimated 80 students and gained some exposure into the life of special needs kids. Coach Richard Carver began the concept six years ago while heading the Bethany Bison ball team and has since forged a new partnership with the Barons. He hopes the same magical chemistry which developed with his former team will be captured again with his current players.

“It’s new, but in time these team members will get more comfortable,” Carver said. “Originally, it was set up to have the kids meet my [Bison] team and for our guys to appreciate all of the gifts and opportunities they have been given, but it has grown into much more. Now, there is a mutual friendship between Bright Promise kids and our players and we, the coaches and players, have learned to make the best of every day no matter what challenges we face. We have learned so much from them. Aside from having a fun day and putting smiles on kids’ faces who truly appreciate our presence, I think there is an understanding that while we come from different backgrounds, we are equally special in God’s eyes. We love those kids. We have the utmost respect and admiration for the faculty and staff at Bright Promise and it is a pleasure to assist them. We just love those kids.”

Teammates joined mascot Baron Von Steubie for a day of fun and doled out Halloween candy to costumed kids, played some music and spent time in the classroom, at lunch and at recess getting to know their young charges.

“I love it, actually,” said freshman Tom Argentine, who portrayed the Baron mascot. “Next semester, I might go into special education or psychology.”

“It’s new to us, but it’s a very good time seeing their faces light up,” added junior Austin Horan.

“I like when they do sports.” “They are nice,” added student Dale McCoy.

School of Bright Promise Principal Jane Bodo said she and her students were equally excited about the visit and she looked forward to the new partnership with the Barons athletes. She also encouraged the players to volunteer at the school and build even more bonds.

“The Franciscan athletes seemed to be jumping right into interacting with the students and enjoying them. The coach and his staff have done a great job preparing the teams for the visit,” she said. “The students seem excited to have visitors and new friends.”