STEUBENVILLE-Area high school students learned about living with disabilities during Simulation Day activities at the School of Bright Promise.

Students from Indian Creek, Jefferson County Joint Vocational School, Steubenville, Buckeye Local, Steubenville Catholic Central, Edison, Toronto and Harrison Central, were invited to take part in the 10th annual event on March 15 in observation of Developmental Disabilities Awareness Month. The teens gathered in the school gym, which included eight stations dedicated to visual and hearing impairments, autism, speech and language, fine motor skills, behavioral and multiple disabilities. Andrea Starkey, school speech and language pathologist, welcomed the group and said the purpose was for them to gain a better understanding about having special needs.

“I want you to see the potential they have,” she said. “We want you to appreciate the hard work they put in and hope by going through the stations you will see [that].”

She explained that the school included 70 kids, many of which had disabilities, and at times they may act out of frustration due to their limitations. The key was for the visitors to understand their situation and try to help make things better.

Teachers, aides and support staff manned the stations and nearly 20 students were divided into smaller groups, spending 15 minutes at each site and performing such activities as maneuvering in a wheelchair; painting without the use of hands; wearing special goggles and using a hockey stick to guide movement and mimic blindness; using a special device to simulate speech difficulties; donning headphones to distort sound; and learning about sensory issues related to autism.

Some of the students on hand said they gained some new perspective on what it was like to have a disability.

Natasha Fedorka, a senior at Edison and JCJVS, said she had difficulty completing tasks at the fine motor skills section, which involved attempting to move small items while wearing a glove. She also painted with her mouth to simulate lacking the use of her hands.

“I’ve learned a lot about fine motor skills and had to accommodate in other ways since I couldn’t use my hands,” she said.

Sarah Mazzaferro and Harleigh Schaffer, juniors at Indian Creek, took part in the wheelchair obstacle course and said they also learned something new.

“It takes a lot of strength and you have to concentrate,” said Schaffer. “It was harder than I thought.”

SBP Principal Jane Bodo was encouraged by the teens and said they gain a lot of insight about what it is like to have a disability.

“It’s exciting and they are receptive to learning. I’m impressed with the students who come in and they take something back with them.”

(Photo Cutline: Natasha Fedorka, a senior at Edison High School and Jefferson County Joint Vocational School, attempts to paint without the use of her hands during a fine motor skills activity at the School of Bright Promise on March 15. The school held its 10th annual Simulation Day event and invited students from local schools to learn what it is like to live with special needs as part of Developmental Disabilities (DD) Awareness Month.) 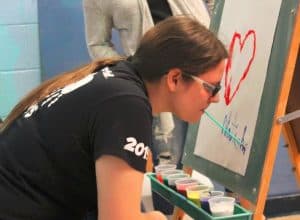