Skip to content
By Mark Porter May 16, 2019Homepage, News

WINTERSVILLE-The newest residence for developmentally disabled individuals is now complete and occupants got the first look at their dwelling as they move closer to more independent living.

Three people are relocating from Shaffer Plaza Apartments to a newly constructed four-bedroom ranch house at 131 Orchard Ave. in Wintersville, but there is a possibility for a fourth occupant in the future. Moving day is set for May 15 but the trio previewed their abode with representatives from state agencies and the Jefferson County Board of Developmental Disabilities. JCBDD Superintendent Michael Zinno was joined by Aaron Lichtenauer of the Ohio Department of Developmental Disabilities’ (DoDD) Capital Housing Office, Bryan McAnally of the Newark-based Wachtel and McAnally architecture firm, Chris Swickard of Consumer Support Services Inc. (CSS), Darlene Perko and Ryan Wood of JCBDD’s Service and Support Administration (SSA) and residents Kelly Oatney, Shawn Lash and Sha Chiles. The occupants are all wheelchair-bound but strive to live more independently, and the goal is to give them that opportunity. The event was documented on video by the Mid-East Ohio Regional Council (MEORC) to showcase how state and county agencies work together to make a difference in the lives of special needs individuals.

As the residents viewed the bedrooms, kitchen and other amenities, they all noted their enthusiasm about being in their own home.

“I feel good,” said Oatney, who spent five years at Shaffer Plaza. “I wanted to be on my own.”

Lash, who lived at Shaffer for the past eight years, will miss the staff there but is excited about his new opportunity.

“It feels good. I’m going to enjoy the quiet and have my own room,” he added. “These guys [at Shaffer] are like our families.”

When Chiles learned he was moving into the house after two years at Shaffer Plaza, he said it was a dream come true.

“It’s been a long time coming,” he said. “My first thought was, ‘My dream is actually coming into fruition. I’ve always had a dream of having my own spot and now it’s actually going to happen. It feels like home.”

Zinno said the residence updates the JCBDD’s house stock in Jefferson County since the other buildings consist of multi-level structures with few options for wheelchair accessibility, plus it opens doors for tenants to have access to housing outside of Shaffer Plaza. He added that the building project is the first for JCBDD since the apartments were created in the 1980s, while Wachtel and McAnally served as project manager and the house is owned by the Eastern Ohio Housing Corp. Financing for the work comes from a mixture of JCBDD funds and part of a grant the board received in 2018 from the DoDD. Officials received up to $598,000 from the Community Capital Assistance Program, which provides financing to county boards and non-profit organizations for the purchase, construction and/or renovation of community housing for persons with special needs. The DoDD’s Capital Housing Office is responsible for the program and three grants for up to $130,000 each, or a total of $390,000, were used to acquire homes with another $318,000 to help construct fully accessible lodging to better serve consumers. Three additional houses were purchased in Wintersville, Richmond and Mingo Junction with the grant and all of the structures are owned by the EOHC, which is a non-profit agency.

“Compared to the other homes we have in Jefferson County, this is more accessible to non-ambulatory individuals,” Zinno continued. “We have an option and can appropriately place someone outside of a nursing home and they can live in the community.”

He added that there were no plans in the immediate future to build another home but the other sites have been updated to remain current and ADA-compliant. About 35 special needs adults now reside in EOHC-owned homes around the community and Shaffer Plaza will assist adults who require extra care. For now, there are 20 occupants at Shaffer with the capacity to help 27 people.

Meanwhile, others on hand said the house would provide a fantastic experience for its residents. Lichtenauer explained his program has aided 20 new builds in the past five years and it was a step in the right direction.

“I think it’s great that we have folks throughout the state who are willing to take on something as daunting as a construction project to help the people we serve,” he said. “It is hard work, but it’s nice to see everybody come together and do something so special.”

McAnally added that the home was entirely Americans with Disabilities Act-accessible and was the 11th project for his company, as well as the sixth one financed by the state.

“I think there’s a need for it and it shows a more residential feel,” he said.

“It’s a good experience and it’s nice to get them out in the community where they want to be,” commented Perko, who is director of consumer services with SSA. “It’s an opportunity to be in a smaller setting and it’s good to see them happy.”

Swickard, who is president of CSS, noted that six full-time and about four part-time workers will work with the residents and tend to their daily needs. CSS serves 780 clients statewide and a total of 11 around the county.

“We will try to get them out into the community to experience things they’ve never experienced before and help them live up to their full potential,” he said. 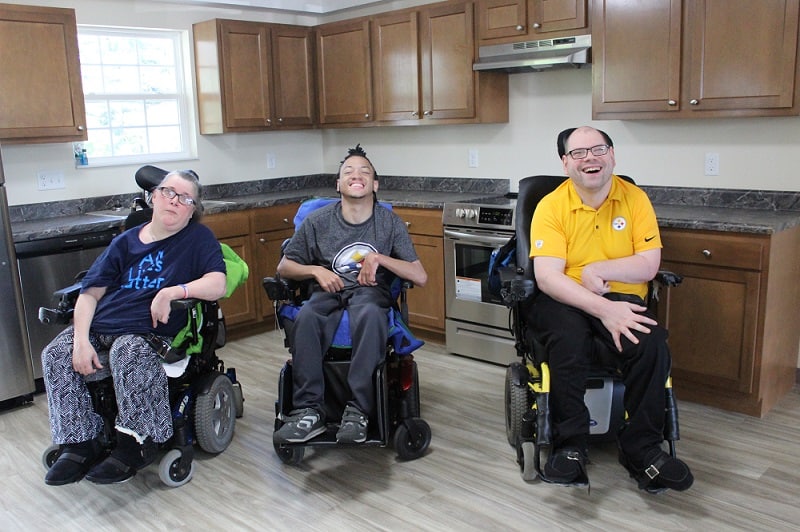 Kelly Oatney, Sha Chiles and Shawn Lash will have their own home thanks to the cooperative efforts of the Jefferson County Board of Developmental Disabilities and Ohio Department of Developmental Disabilities. JCBDD received funding from the DoDD to acquire three new residences and build another new home to provide more independent living for special needs individuals in the community. Oatney, Chiles and Lash will occupy a newly-built home in Wintersville and got a glimpse of the site before officially moving in.